I have wanted to write this post for quite some time, and although it has taken me longer than I expected, I am finally able to look back and reflect on all three totally different experiences that I have had. At the end of the day, all three girls ended up happy & healthy, and that’s more than I could have ever asked for. 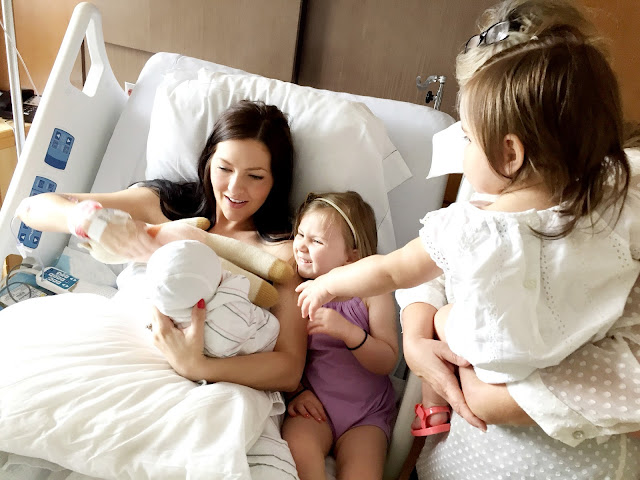 So I thought I would compare the journeys we have had with each baby, starting with my first. Of course I went into it knowing only what I learned from other moms & from our hospital birth classes, but was 100% determined to make breastfeeding work. The lactation consultants were so helpful in the hospital, but within the first 24 hours of Harper’s life, we had already given her formula at our nurses request, as she was not latching and was losing weight. Looking back, I probably should have resisted a bit, a little spoon feeding or using my pump could have done the trick. But, I definitely don’t dwell on it. After weeks of not being able to latch, I resorted to exclusively pumping and we did that for five or so months, and eventually switched to a sensitive stomach formula because of her spit up issues. (More in depth post about exclusively pumping). End result, she was SO MUCH happier, which was all that mattered at that point & I wouldn’t have changed a thing.
Baby number two. I packed my pump for the hospital, assuming there was absolutely no chance this baby would latch if my first didn’t. I went into it still feeling pretty defeated from my first time around, but was pleasantly surprised when she naturally latched right away after she was born. I was completely shocked, and couldn’t believe I was actually doing it! I had a lot of soreness and pain (which is normal) that I was sure was going to end our journey early, but we pushed through it. I was proud of making it through the first few weeks. Eloise had lots of gas & tummy issues, didn’t sleep well and was terribly fussy a lot of the time, and rather than just consider the fact that she was a baby, and that’s kinda what babies do, I blamed it all on my milk. Was it something I was eating? Or was I not eating enough fats to keep her full? Maybe I should give her formula today. Is she not getting enough? Maybe I should supplement with a bottle. And before I knew it, I had depleted my own milk supply, worrying about all of the things I was doing wrong & supplementing so much. I let my worries, stress & fear of failing get the best of me, and while I don’t dwell on it, I do look back thinking I could have done a better job.
And now baby number three. To be honest, I sorta forgot about all of breastfeeding issues that I had with my first two, mostly because I was scared shitless of all the other chaos that was about to consume my life with having three kids. It was my third c-section, and despite what people warned me about, and some nurses even told me, I had no problem bonding with Claire, no problem with her latching & no issues with my milk coming in. I had the most pain somehow with her though, I remember laying awake at night crying and stalling to put her on the breast because it hurt so bad. She wasn’t a good sleeper, she did have some tummy troubles on and off, but the thing was, I was too lazy to make her a bottle of formula. It took more hands than nursing did, so we pushed through it. I didn’t have time to worry about if my milk was sufficient, or about what I ate. I was too busy making sure my three year old didn’t give my one year old a haircut and things of that nature. Our feeding issues with Claire were on a totally different spectrum, I tried introducing a bottle and she refused, to the point where I couldn’t be away from her for more than three hours at a time for quite a few months. It was so weird compared to the experiences that we had with the other girls, but eventually we rolled into eight straight months of nursing & I was in total disbelief.
I sort of weaned her on accident around 9 months, she was using nursing as a pacifier at night and was still waking up multiple times, so Brandon would wake with her and give her a bottle, and my mom kept her once overnight and I didn’t pump. My brain was scrambled eggs at that point & I wasn’t thinking clearly about the effects it would have on my milk supply, but ultimately it was the step that finally got her sleeping longer at night. Her sleep improved to much after that, but now has somewhat regressed, so looking back, I do regret not nursing her longer. But it still seems surreal to me that I nursed for nine whole months, with two toddlers, during the most chaotic time of my life. If there has ever been an accomplishment I am most proud of, it might be that one. 😉
So the point of this post, other than to share my experience, is hoping that I help some of you through one of the most difficult parts of motherhood. To tell you that if nursing is important to you, and you just relax & not let the fear of failure get the best of you, you will make it. You can push through the pain, six weeks really is the sweet spot, things get so much easier after that.
But also to tell you that if breastfeeding doesn’t work out for you, that’s okay too!! All three of my kids ate string cheese & watermelon straight off the ground today while they played on a slip n slide. What matters is that you are doing what works for you and your baby, and that may be different with each child, so don’t get discouraged if the first time (or second, or third..) don’t go as planned.
You’re doing GREAT, and we are all here to support you.
21