Another year, another amazing Halloween night!!! Halloween is our favorite holiday around here, and this year was no exception. We decided to forgo the annual Halloween party that we usually host, and take the girls to my parents neighborhood to trick-or-treat instead. Our neighborhood really is fun for trick-or-treating, as lots of houses turn into haunted houses & people love to have fire pits in their driveways, it is a super festive atmosphere for sure. But, it isn’t the best for younger kids, as there is lots of walking up and down hills to get to each house. My parents neighborhood has hundreds of houses on cute little streets with wide sidewalks, so the girls were able to hit a bunch more houses & have a lot more fun!!
We went with a Wizard of Oz theme, Harper was Glinda the Good Witch (which of course she was obsessed with because of the dress & crown), Eloise was Dorothy & Claire was Toto! 😉 Our friends met us at my parents to trick-or-treat as well, and their little baby boy Leo was dressed as a Lion (totally unplanned) which matched the girls’ costumes perfectly. They were such a cute, festive bunch!!! 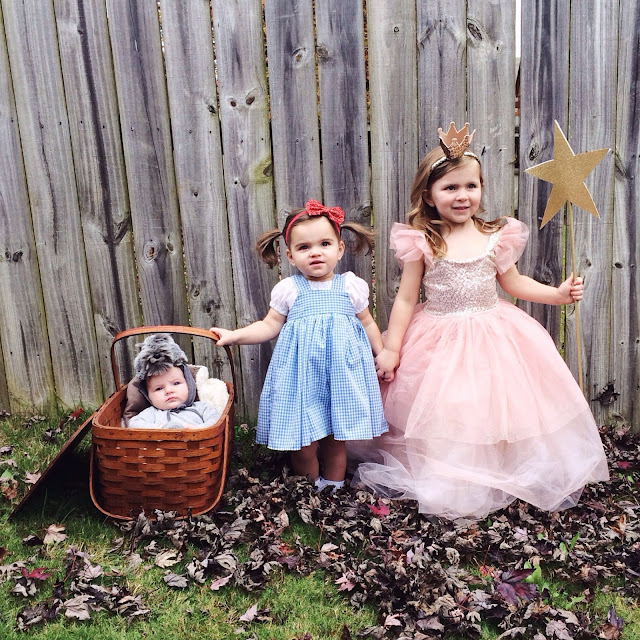 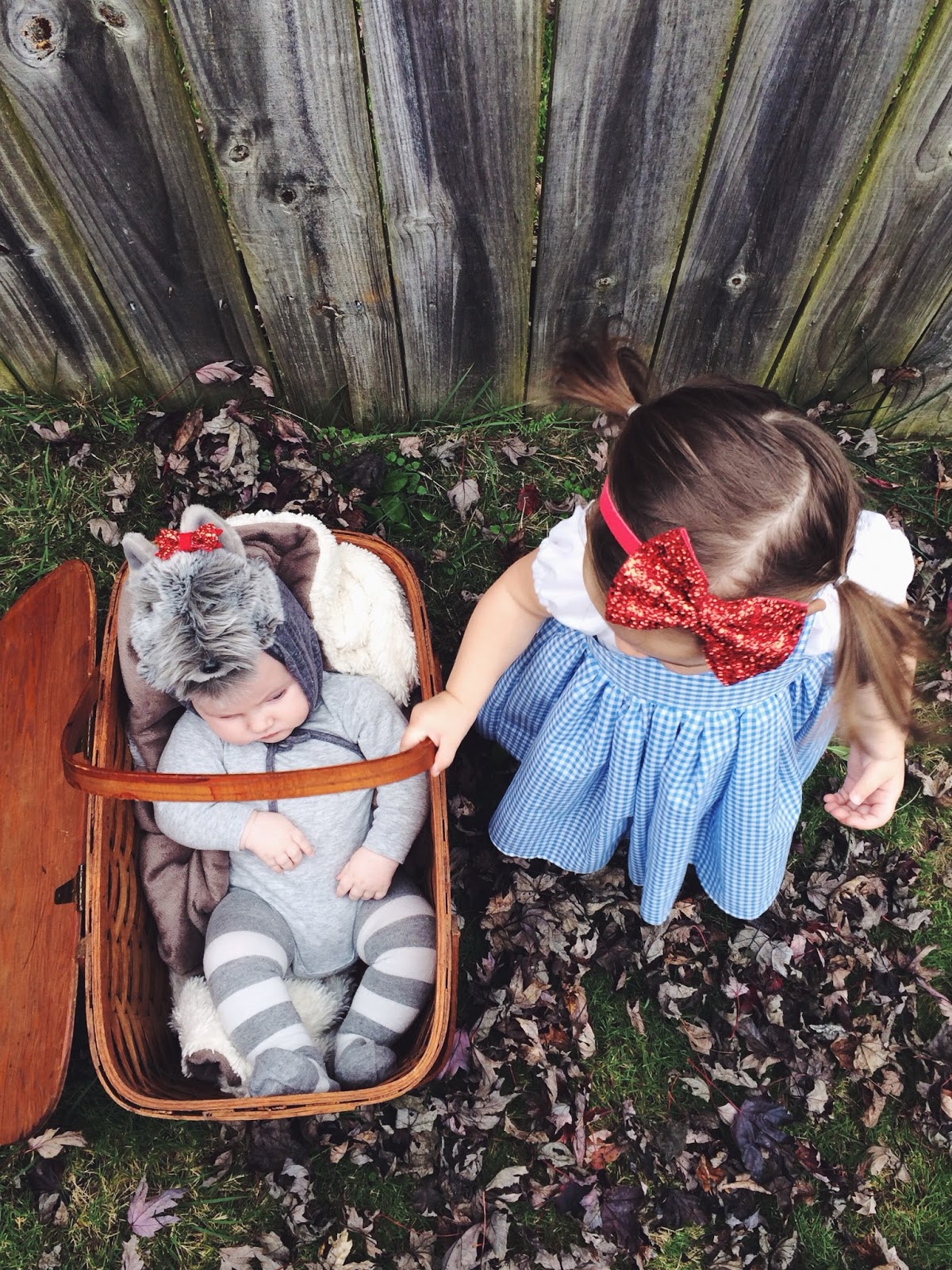 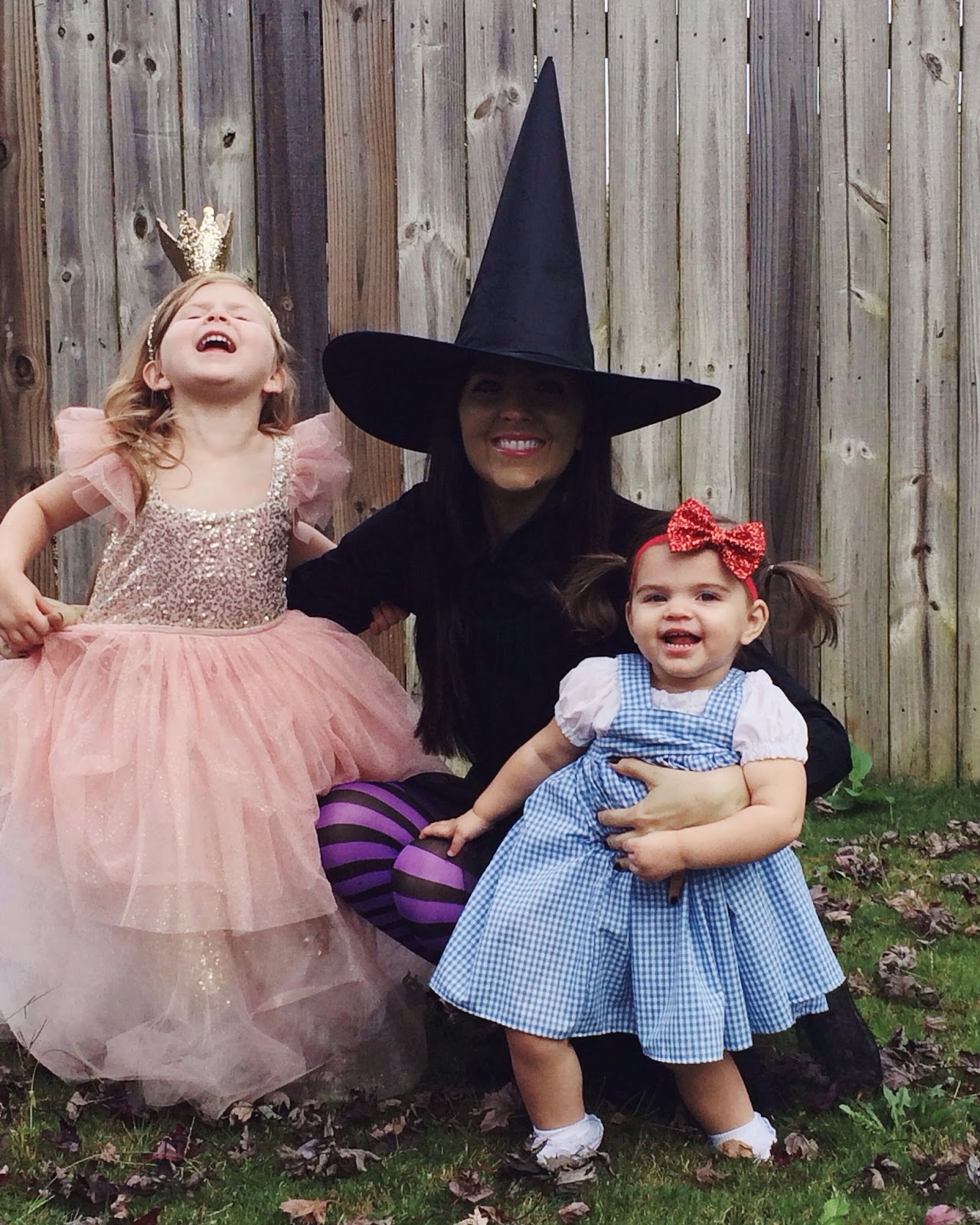 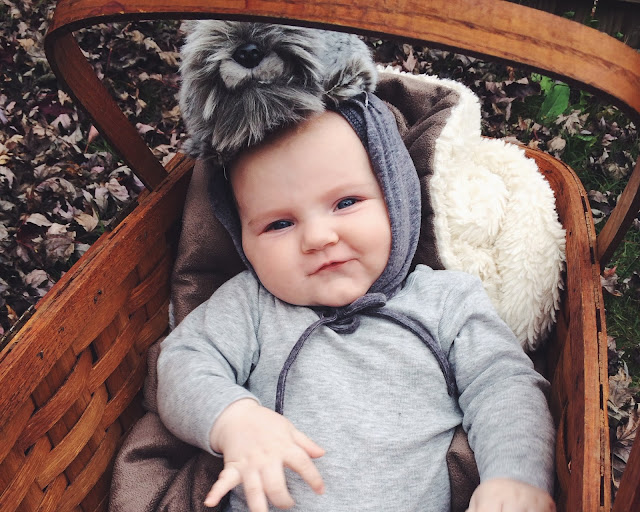 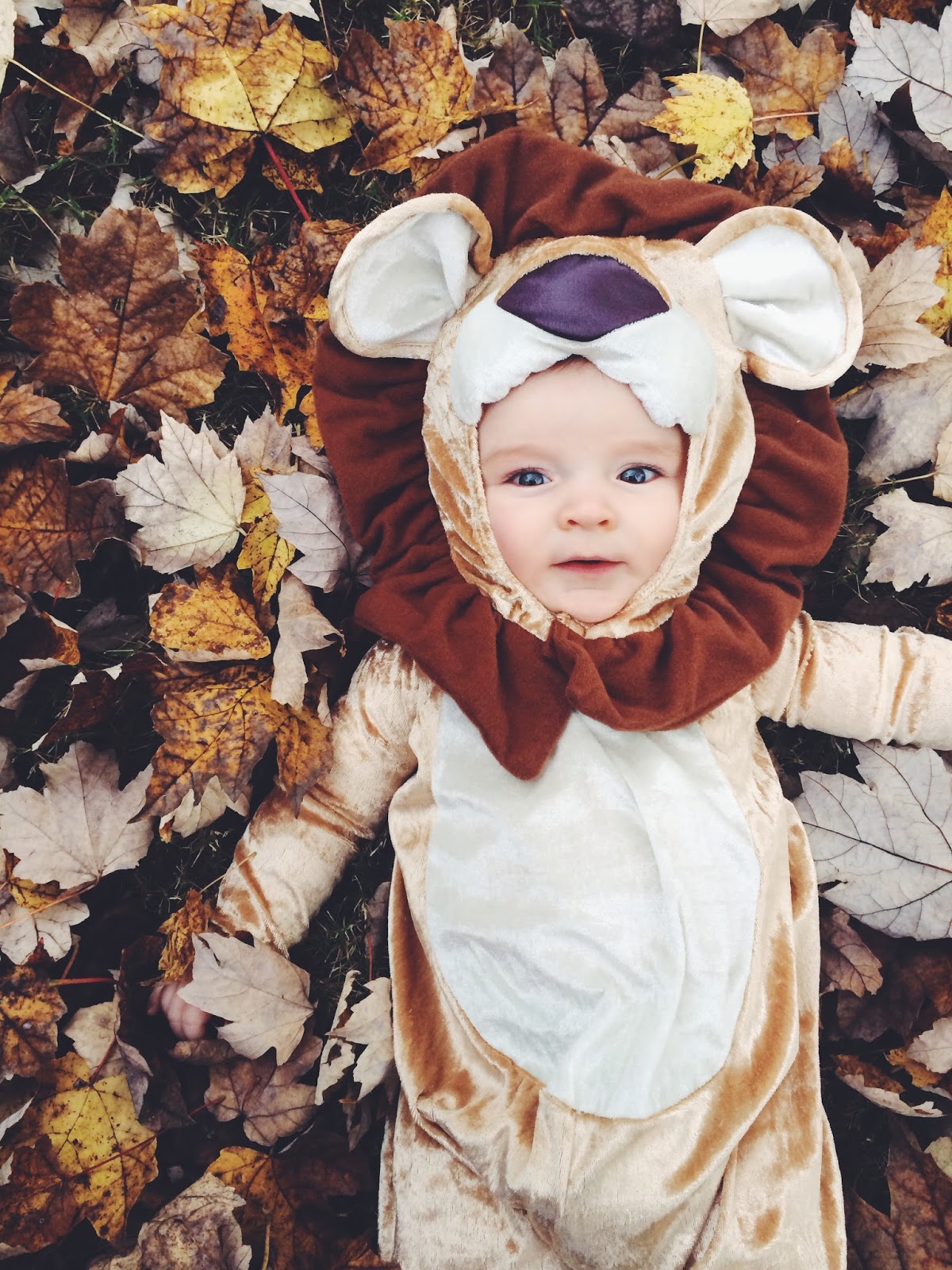 I can’t really sew, so I usually opt for a semi-homemade costume approach. I found a pink & gold dress for Harper that I knew she would love and could add to her dress up collection, but then added a dozen layers of tulle to the sleeves & underneath to make the dress fuller & add to the length. I bought Eloise’s Dorothy dress on Etsy, and also added a few layers of tulle underneath to add to the fullness, and she wore the cutest ruby red slippers of Harper’s from Old Navy last year. Toto was once a stuffed animal, I took it all apart (it’s not every day that you decapitate a stuffed dog) & stitched it to a grey bonnet for Claire. I also made her little fur puppy paw mittens but completely forgot to put them on her before we took pictures, but she sure was a cute little toto! Brandon & I decided not to dress up this year (although he did initially agree to dress as the lollipop guild with me), but last minute I was too sad not wearing a costume so I threw together something wicked-witchy with things I already had to take the girls trick-or-treating in. Harper was a huge fan of the green makeup! 😉
The girls LOVED trick-or-treating this year, Eloise was deemed resident-door-knocker & Harper would give the best “trick or treat, happy halloween!” before trying to walk inside each house as they opened the door. The girls picked mostly suckers and smarties from each candy bowl, except for the house that gave out play-doh, which blew their minds. Brandon & I ate most of their chocolate once they went to bed as we stayed up way past our bedtime watching Scream. 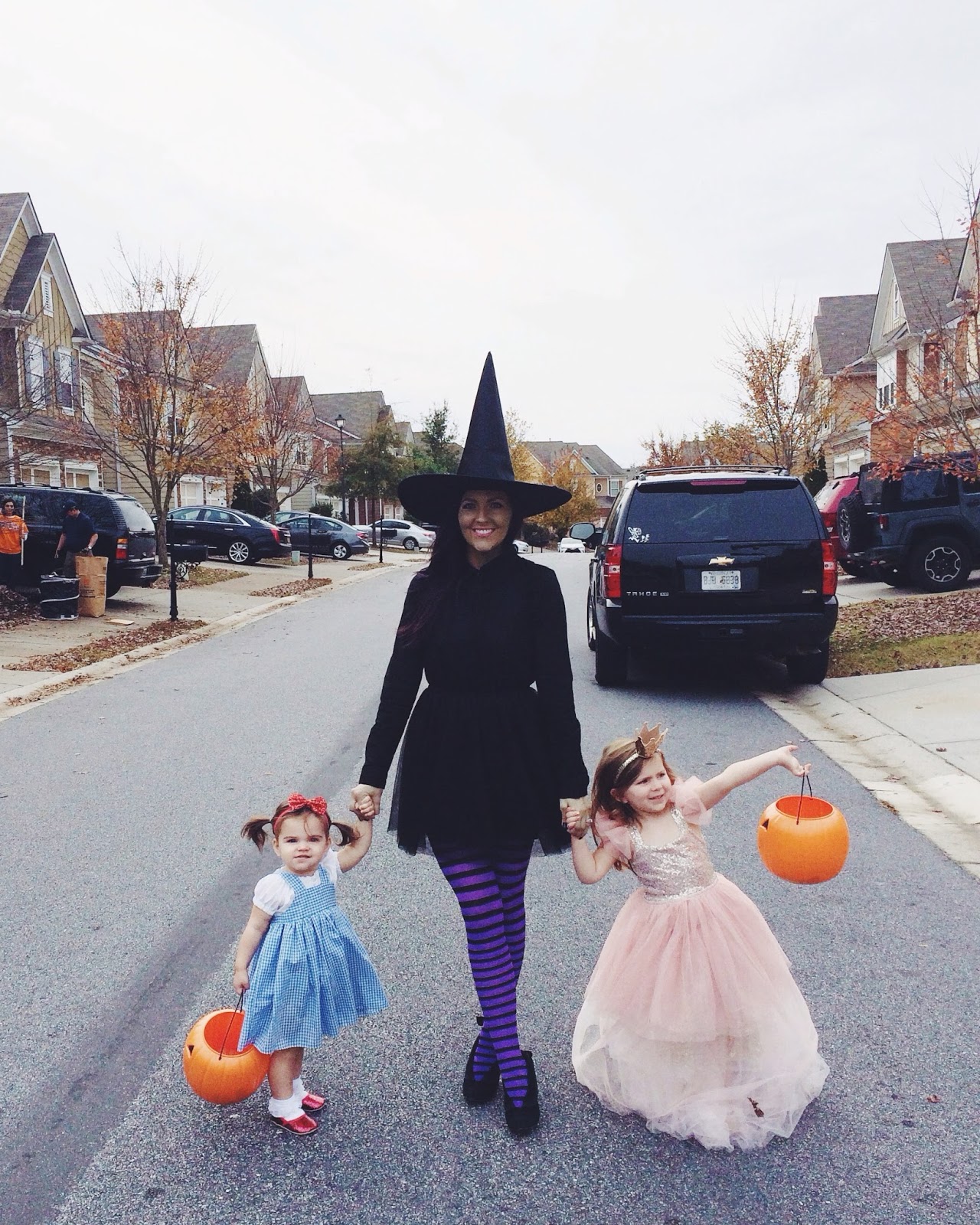 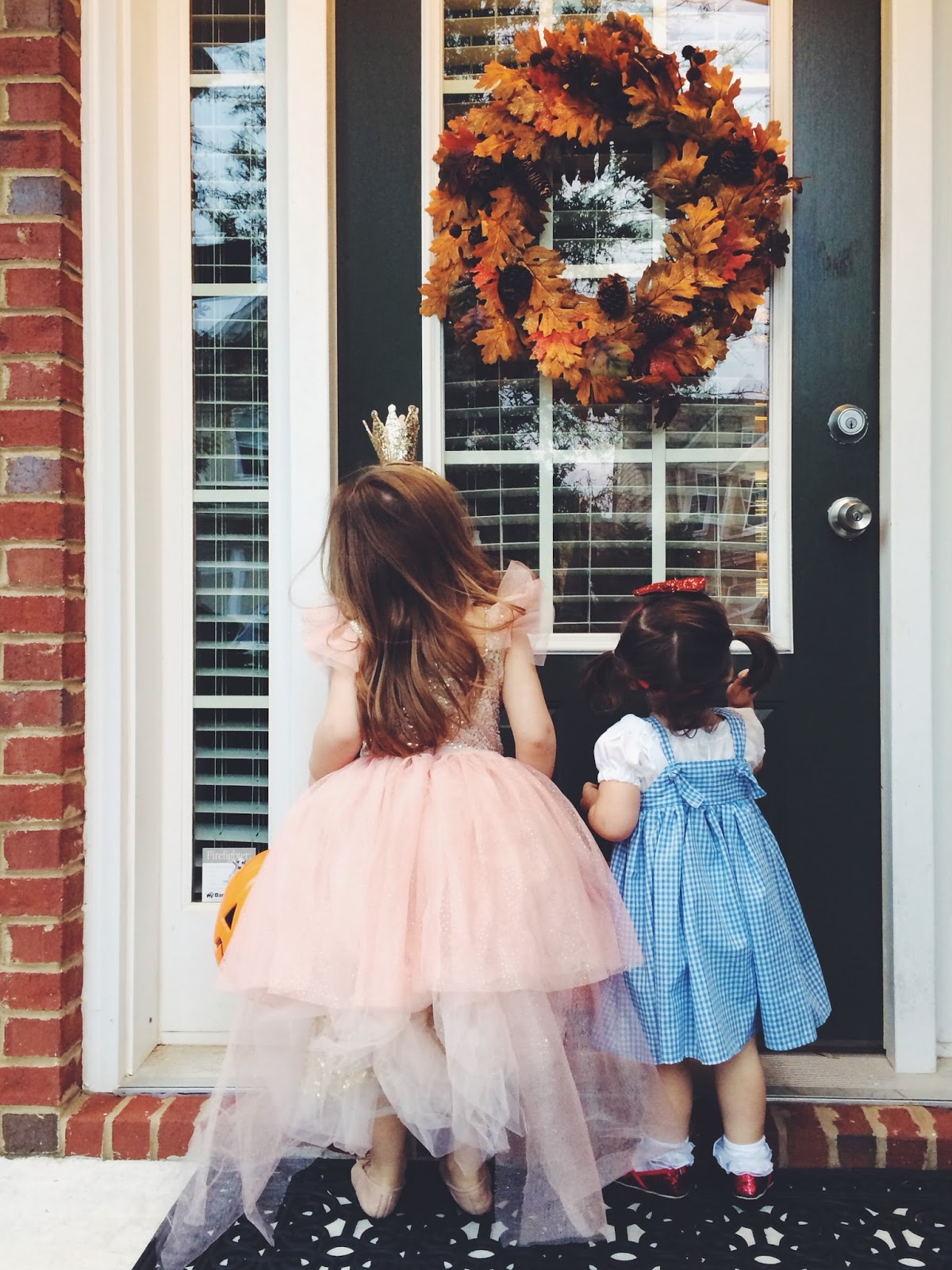 I hope you all had a fun & festive Halloween!!! Time to kick off the MOST wonderful time of the year!! XO